NOTE: You may want to take the Opossum Quiz before reading this page
and compare your current knowledge of the opossum with the actual facts!
Be sure also to read our FAQs page for more information about opossums.

The name “opossum” comes from the Algonquin Indian name for the animal, pasum. How the initial “o” was appended no one seems to know for certain. Some have suggested that when Capt. John Smith asked his Indian friend what the animal was called, he uttered a short grunt before saying the word. The theory that the opossum descended from a family of Irish O’Possums has been entirely discredited by modern scholarship.

The opossum is the only marsupial in North America. This means the animal carries its young in a pouch, much the same as does the Australian kangaroo. Once a female opossum mates, she gives birth a mere 13 days later to a litter of roughly a dozen baby opossums that are each no bigger than a honeybee. These tiny, blind, and naked babies crawl on their own all the way to their mother’s pouch. There they each latch on to a teat from which they receive milk. They remain there for nearly three months.

Once the young opossums leave the pouch, they’re still not ready to face the world on their own. For the next 10 to 15 days they go about clinging to mother’s fur. Eventually they become too heavy to hang on during these trips and one by one fall off. By the time this happens, the young opossum is fully weaned and able to forage for himself. 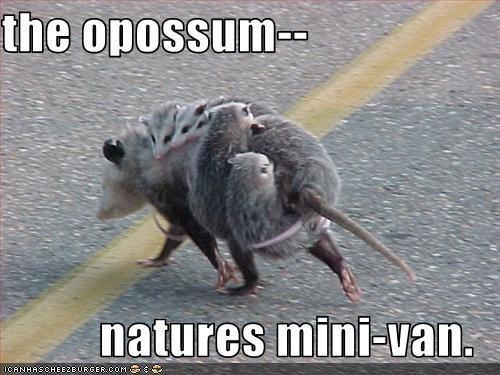 The opossum is perhaps best known for faking death as a means of defense when attacked. While he is capable of falling over on his side, his mouth open in a death-like grin with saliva running out, from which state he cannot be roused until the danger is past, this is usually done only as a last resort. More likely a threatened opossum will look for the nearest exit and run away (or more accurately “waddle away,” since they cannot move particularly fast). They will also sometimes bare their teeth, hiss, or even growl. With such displays they appear quite fierce, but actually they are not accomplished fighters and are very rarely aggressive.

Cleanliness is next to opossumness

Many people consider the opossum a filthy animal, in part because of his mousy gray coat but also because he’s often seen foraging through trash cans and is known to eat carrion. In truth, however, the opossum is one of the cleanest animals around. They groom and bathe themselves meticulously, as scrupulously as the most finicky house cat, and have even been observed to stop in the midst of eating to clean themselves several times before finishing. The only thing he’s missing is a dinner napkin!

A popular belief is that opossums like to hang by their tails from tree limbs. The idea of a half-dozen opossums swinging gleefully from a tree is one impressed on many a young mind. However, though the opossum does use his prehensile tail to assist in climbing, the adult is far too heavy to support himself by his tail alone. Though young opossums can occassionally be seen hanging by their tails for brief periods, it is far from a common practice.

Most people seem to think opossums live in trees. While they will sometimes adopt the high life, even to the point of recycling an old squirrel’s nest, they much prefer to inhabit underground dens. Unlike the armadillo, opossums do not dig their own burrows but prefer ready-made accommodations — even those formerly used by armadillos! Into these dens they tote bedding material such as leaves and grass which they hold firmly with the loop of their tail.

Opossums have one characteristic that makes them more like a human being than nearly any other animal: opposable thumbs. Their hind feet very much resemble small human hands and are equipped with thumbs that are great aids in climbing ... and in holding writing implements which they use for writing verse. (See our ’Possum Poetry page.)

Not many people have tried keeping opossums as pets, and most who’ve tried have been disappointed. Expecting them to act more like a cat or dog perhaps, the opossum is not so suited. Nevertheless, opossums have often been rescued by humans and raised to adulthood to be released back into the wild. People who do this kind of work are called “rehabilitators” (or “rehabbers” for short), and they are generally well rewarded by the opossum’s own unique personality. A few individuals do actually keep opossums as pets and enjoy their company immensely. One should always check with state and local laws before attempting this as it is illegal in some areas to keep opossums as pets. One also should check with a veterinarian before trying to deal directly with a wild opossum.

Home on the range

The opossum ranges across nearly all the United States (except some of the most arid regions) and even thrives as far north as southern Canada. And in spite of the constant threat of death from predators, parasites, and the ever-present automobile, he seems to be slowly expanding his range even farther.