’Possums in the News


An article in the Poughkeepsie Journal that describes how opossums help minimize the prevalence of lyme disease.

A ’possum relocates to northwest Ontario 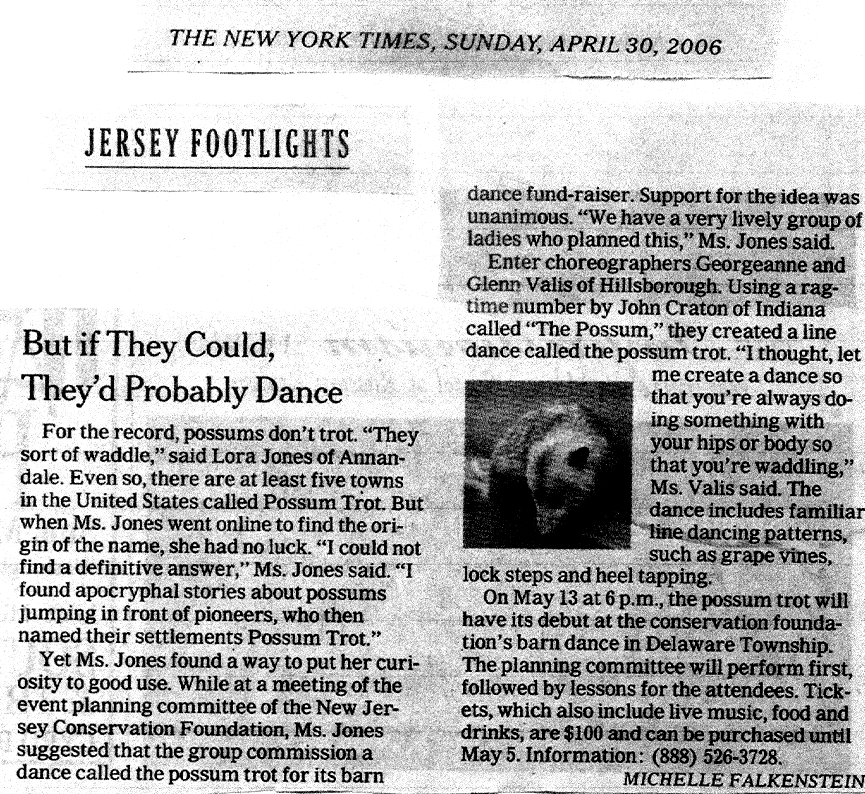 A Few Words in Praise of the Possum

Inspiration has a funny way of striking.

We were driving home from Fairmont this past weekend, tossing around possible subjects for my column. I just couldn't seem to find an idea.

“Don’t worry about it,” Mitch said. “Something will hit you.”

A stuffed possum, to be exact. It had been gleefully flung at the back of my head by toddler Celeste.

Other children drag around blankets or dolls or cute, furry stuffed bears. Not my little girl. She has been attached to “Poss” for quite a while now. He’s a very realistic looking possum, which causes many double-takes (and West Virginia jokes) when they go out in public together.

Personally, I think possum get a bad rap. People liken them to big rats because of their tail, and insist they are dirty and stupid. (Of course, they do seem to have that little problem with cars.)

But I’ve found them to be, well, somewhat dignified creatures.

Several years ago, when I lived in a fairly remote area of Red House, I started a compost pile behind my house. Problem is, nothing ever lasted long enough out there to decompose. In a matter of days, a large possum with a crippled back leg discovered the pile. And he wasn’t alone in his discovery. He was soon competing with several raccoons and a large family of foxes.

But the enterprising possum quickly realized I took scraps outside at just about the same time every night, and he’d be there waiting. His ingenuity and promptness impressed me. I could have set my watch by him. If I was running late, I would see him out there, pacing impatiently and looking annoyed.

I sometimes stayed outside and watched while he dined. He didn’t exactly have the best table manners. He would usually sit on his hind legs and shove food in his mouth with both hands, with speed and quantity his obvious goals. Spaghetti was his favorite, and I usually tossed extra noodles in the pot when fixing dinner, just so there would be some for him.

He would make happy little grunts when he ate spaghetti, and his white belly would soon be stained red from the sauce. (It was always pure white again by the next day. He might have been a glutton, but he was always well groomed.)

If there was anything remaining after the possum was finished, the other wildlife quickly carried it off. They took everything every night. Except for one time.

I decided to get creative in the kitchen, trying out a new recipe for pierogies. The experiment failed, so I took it outside and dumped it in the yard. The possum looked thrilled by the size of his dinner, but after just a few bites, his look turned to disgust.

“You're a possum,” I said, defending his obvious criticism of my cooking skills. “Possum are supposed to eat anything.”

He apparently disagreed, and waddled off in search of more edible fare, such as road kill.

So I learned two things:

To have a possum refuse your cooking is the ultimate insult.

Being hit with one in the back of the head can be inspirational.

Karin Vingle is a reporter for the Charleston Gazette.
Reprinted by permission.

The following item was an Associated Press piece that appeared several years ago,
but I thought you might enjoy reading it.

CLANTON, Ala. — F. Basil Clark, operator of the world’s largest opossum ranch, says people should be more like the critters he raises — stupid and ignorant.

“The possum is too ignorant to know he’s a marsupial, that he can’t survive in today’s world, that he should have died off with the dinosaurs,” Clark said. “He’s so stupid he doesn’t realize he can’t survive, so he goes ahead and does it.

“People who believe that can do things nobody else has done, because they’re too ignorant to know it can’t be done and so stupid they don’t realize they can’t do it,” Clark said.

“If you’ve got three things, you can do anything you want to do,” he said. “A belief in God almighty, if you’re ignorant of the fact it can’t be done, and stupid enough to go ahead and do it.

“Education teaches you you can’t do it. So I’m an advocator of stupidity and ignorance, without which a good education ain’t worth a dime.”

Clark, who is mayor of Clanton, heads the 400,00-member Possum Growers and Breeders Association.

The group is dedicated to good-natured fun and storytelling, but also to promoting the opossum as both a food source and a research animal.

Clark’s “possum ranch” is about 3.7 million acres of mostly undeveloped land in central Alabama. That 579-square-mile spread, of course, doesn’t all belong to Clark.

“I just raise my possums on it. It don’t cost anything. I just take ’em out in the spring and turn ’em loose, then round ’em up in the fall. People [who own the land] don’t even know they’ve raised ’em for me,”" he said.

He said in a national emergency, when the country needed a huge supply of high-protein opossum meat, he could round up enough of the marsupials, primitive animals that raise their young in a pouch, from his “ranch” to produce about 750,000 pounds of meat, provided he got enough help for the roundup.

Clark raises many of his registered opossums in cages on his private land, but since “a registered possum is a better possum” it’s easy to spot them after they’ve spent a summer feeding in the woods with their wild cousins.

Registered opossums, he said, like any other animal man raises, are bred to improve certain traits, such as fur coat, more meat per pound of animal and better overall appearance.

“It’s beautiful fur,” he said, getting back to his feet after pulling a young registered opossum out from under a desk in his city hall office.

When properly cooked, opossum is much like pork or chicken, he said.

The opossum makes a good research animal because it’s very low on the evolutionry scale with many features of mammals. It also has many features similar to reptiles — such as its jaw muscles, which give it a bite like a steel trap.

It can be used for emryo research because opossums begin their lives in an embryonic state, crawling into the mother’s pouch, where they grow past the state of development where mammals are born. Each mother produces several times as many embryos as she can handle in the pouch, so there is a ready-made source of research animals.

Opossums currently are used for research on nerves, stomach and intestines, the liver and on the heart and circulatory system, Clark said. “It’s got a very good heart.”

“It’s an ideal research animal,” he said. “You couldn’t put anything together that would be any better. It’s similar to humans in a lot of ways, but it’s also simple, it’s where you get right back to basics.”

Send us your news items!