My History with the Opossum

I was following my uncle’s car to his house just outside of Jacksonville when I saw something white rush in front of his car. Being of minute stature, the opossum that darted in front of my uncle was merely rolled beneath the underside of the car, unhurt but undoubtedly having experienced a significant vertiginous event. What I remember most was the split second in which I saw the critter flip out from underneath my uncle’s car to look up quickly only to see my headlights. As though he knew he was about to repeat his traumatic gymnastics, he glanced up with an expression of “Oh, geez!” then submitted himself to my undercarriage as well.

Little more thought was given to this species until one night in early spring 1998 when I opened my back door. (We’re city folks but have discovered that opossums can become cultured too.) When I opened the door leading out onto my patio it struck against something heavy. Suspecting that my young sons had left some bizarre object lying by the door, I shoved again only to hear a slight grunt. At that the object rose and waddled over to the opposite side of the patio, then turned to look at me as though to say, “Sorry about that, old chap. No harm done.” He thenceforth meandered off, calmly making his way to a neighbor’s yard.

For me the episode became the genesis of this website and of the Imperial Order of the Opossum. It is hoped that these few pages will help dispell some of the misconceptions held about one of our continent’s most unique inhabitants. I hope you enjoy your visit. Be sure to tell all your friends, marsupial and human alike. 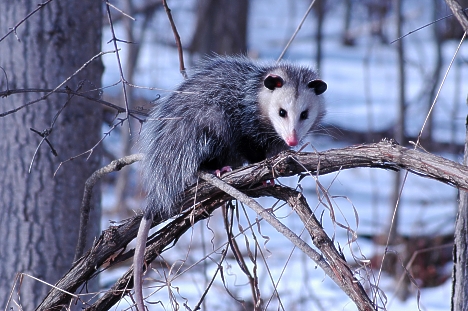 Photo © by Ron Saul. Used by permission.
The Beautiful Opossum